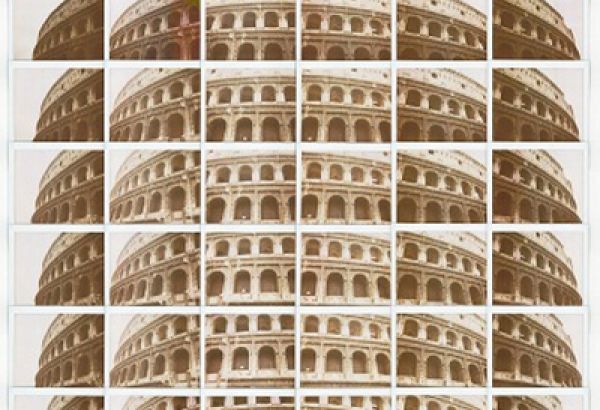 Promoted by Istituto Veneto di Scienze ed Arti, on February 16th Paesaggio Italia is opening at Palazzo Franchetti. This great exhibition, by Maurizio Galimberti, presents more tha 150 images, his most significant shoots, a summary of his research through the rediscovery and narration of our country, of some places chosen by the author thanks to their meaning and elected by himself places in the heart. For the first time a great exhibition and a book document the Gran Tour.

Paesaggio Italia, curated by Benedetta Donato, is an exhibiotn produced by Casa dei Tre Oci and Civita Tre Venezie, in association with GiArt.

The result is an out of the ordinary anthological work about landscape in Italy, portraited throuh all the forms of expression experienced by the Istant Artist with his Polaroids. An impressive kaleidoscope of images, consisting of unique shoots, that tells about Maurizio Galimberti's paths and digressions, about his experience of transformation and renovation during more than twenty years of work on landscapes. "A new beginning", as defined by Denis Curti, who writes about him: "With this new and surprising "Viaggo in Italia" Maurizio Galimberti continues the photographic research dedicated to places, spaces, landscapes and horizons. Among all the different possible trajectories, Galimberti looks for the abstraction but he has to deal with the sense of belonging, with the recognisable and still points of the architectures, with the charm of the squares, the glaring force of Puglia's light, the plain's veneer of emotion, the baroque pride of Sicily. With Milan, his city. Here he lives and works. For some traits the visual pathway becomes autobiographical. He digs up some polaroids teken in the 1990s, evidence of his devotion and fidelity to a certain idea of Italian spirit, destined to remain against the background: pawns useful in keeping the road".

His polaroids, thanks to the various compositional possibilities experienced, become a shrine of endless visions, which allow an absolutely unexpected rereading and a rediscovery of our country's places. Architectures, cities, landscapes will be proposed in the form of single polaroid, "mosaics", ready-made, which are those who rapresent the technical and expressive procedures privileged by the artist who, on this occasion, experiences for the first time a new photographic film, Impossible, first black and white sample. In this narration Galimberti proves to have reached an artistic awareness that reveals itself in the photographic attitude of someone who is ready to disorient himself, leaving behind his own commonplace.