THE WAY OF ENTHUSIASTS 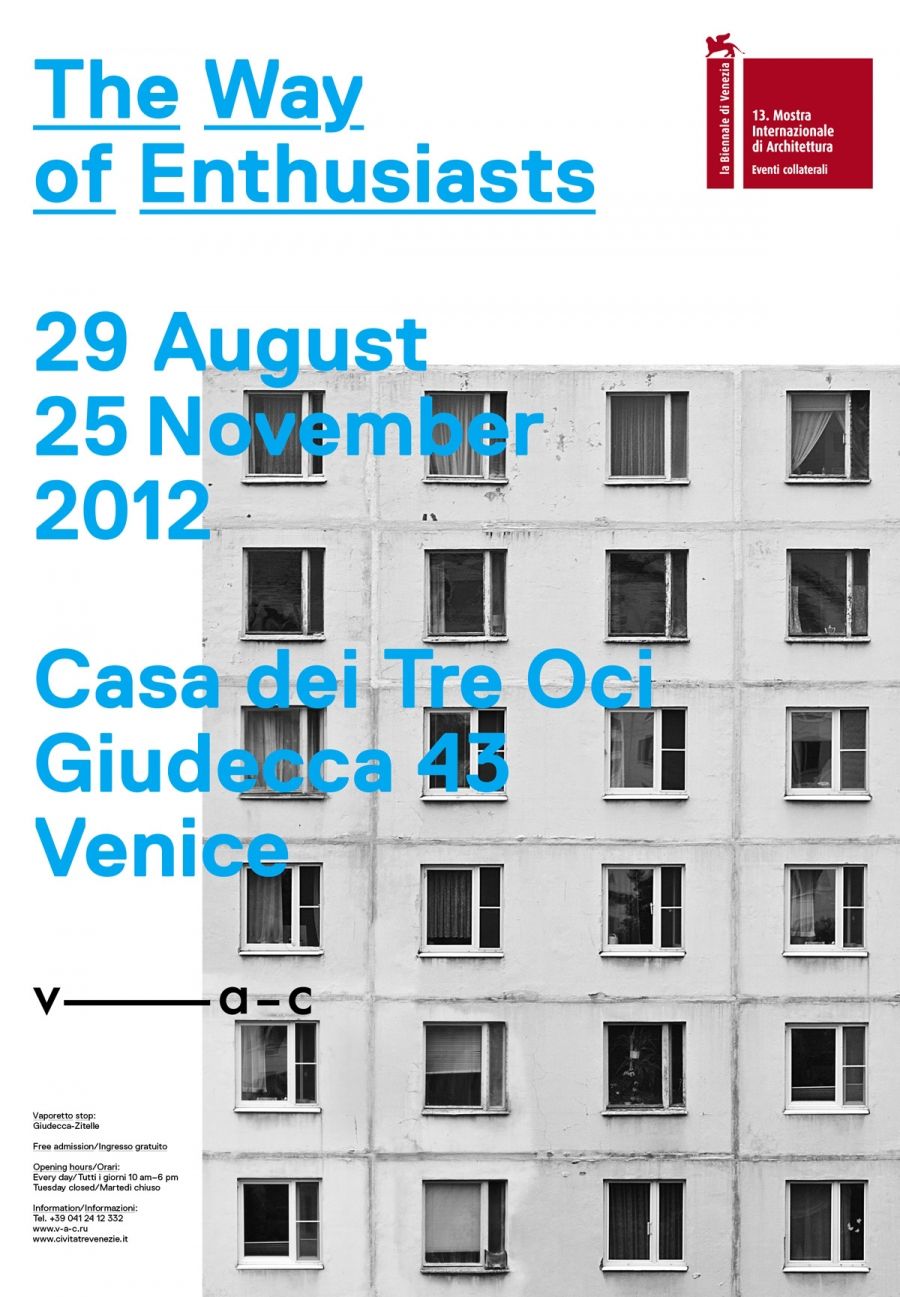 V-A-C Foundation, a not-for-profit, Moscow-based institution, committed to the presentation, production and development of Russian Contemporary Art nationally and internationally, is proud to present the exhibition, The Way of Enthusiasts during the 13th International Architecture Exhibition – la Biennale di Venezia.

This dynamic, multi-form exhibition, utilizes the urban and architectural context of the biennale as a filter and lens through which to compile the scattered phenomena of the last decades of Russian art into a vital and comprehensive landscape.

The Way of Enthusiasts aims to explore the structure and artistic discourse between artists and within works produced during and subsequent to a specific historical and cultural period in Russia, and further attempts to trace the relationships and palpable nerves and threads of intersection between art and architecture. It features such artists whose practices began to evolve in the 70’s and 80s, under the particularly intense political and architectural circumstances of a post-ideological society, namely the collapsed social project of building industrial public housing in Russia, and further looks at the work of a new generation of artists post 90’s. The tattered, half-mutated remnants of these architectural experiments, ever present in today’s cities are inhabited by the ghosts of the past and the nightmares of the present and continue to play a definitive role in contemporary artistic dialogues. This next generation of artists have remained firmly outside the logic of territorial redistribution and resulting conflict. In the work of Olga Chernysheva, the city with its ‘poetry’ of aging, incongruity and fatally unfulfilled expectations, is endlessly observed and meditated over. Simultaneously, other artists strive to eradicate governmental control over space by re-appropriating public places. Such impulses are explicitly manifested in the work of David Ter-Oganian, especially when he tries to delimitate the arena of control (or non-control) as in his sketches, where the grid of a notebook is used to measure the scale (or the out-of-scale) of the revolution.

The chaos of Sergey Sapozhnikov installations - deliberately constructed in the ruined outskirts of the city of Rostov-on-Don - refer to the potential of liberation from the structure of organized space and codified behaviour.

Anastasia Ryabova plays with the abandoned signs of former power representation in the city by looking “back to the future” of previous collective practices, archiving and virtualizing the common ground through networks and community newspapers. The new instruments of socio-political control and occupation of cities are extremely significant for Arseniy Zhilyaev as well as the collective memory of Soviet living space with its common memorabilia and shared remnants of interiors and objects. His ambitious piece for this show reconstructs a fully operational public laundry - a space typical of the shared facility provisions within constructivist communal housing and a feature of Soviet life where all aspects of private life had to be shared, until the collapse of the Union – within the new and unusual context of an historic palazzo in Venice.

The Way of Enthusiasts is curated by Katerina Chuchalina and Silvia Franceschini. Architectural expertise from Daria Paramonova and Kuba Snopek.

A fully illustrated catalogue will be produced to accompany the exhibition.