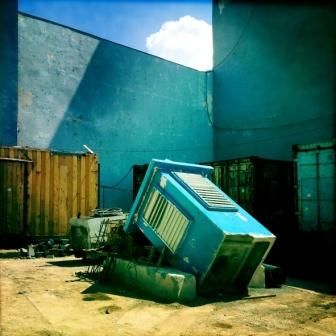 The title of a successful James Ivory film provides the exhibition pathway, which leads through several fields of research. The first and perhaps the most important concerns personal memory, made up not of the salient events of a life but of the small details, marginal things, the reverberations of everyday actions that by being turned into photos take on another, symbolic value open to several meanings.

It is not a question of recording the visual diary of a day (as the title may suggest) but giving consistency to the details of one’s own experience, whether recent or long ago. A kind of personal, profound evocation in which to make the observer a participant. Another possible reading is as a paraphrase of the transience of life and the absence of real values of reference in contemporary society; human products are taken into consideration, with the aim of capturing the breakdown and decay they undergo through use, the action of time and their subsequent abandon, which often gives rise to new evidence dense with unexpected meanings. But that is not all; the man-made alterations of the land and the unstoppable advance of human settlements temporarily or permanently alter situations and environments long seen as unchangeable. The Gondola photographers dwell on these changes without accentuating the reasons for the intervention but, by simple recognition of what has happened, direct or better stimulate reflection, whatever this may be.

The guest photographer of this year is Samuel Delcroix (Borinage, Belgium – 1961). Delcroix teaches photography and infographic in Mons, where he lives and works. He specialises in the application of plastic materials and other experimental techniques in the field of photography. He has been making a constant visual documentation of the abandoned industrial areas of his region for twenty years. The triptych on display is part of a mosaic-fresco consisting of nine photographs taken in the classrooms of an abandoned school where he began his career as a teacher. His pictures have been published in specialist magazines and the daily press; he has exhibited repeatedly in Belgium and abroad.