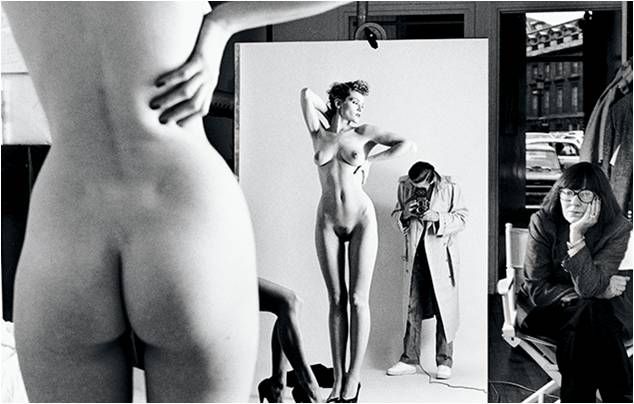 In White Women (1976) Newton chose 84 images (44 in colour and 40 in black and white) and, for the first time, introduced nudity and eroticism to fashion photography. Balanced between art and fashion, the shots are mainly of female nudes, through which he presented contemporary fashion. These visions had their origins in the history of art, in particular Goya’s Maja desnuda and Maja vestida, now in the Prado, Madrid. Newton’s provocation with his introduction of radical nudity to fashion photography was then taken up by many other photographers and directors and was to remain the symbol of his personal artistic output.

Women’s bodies and clothes are also at the centre of Sleepless Nights, published in 1978. In this case, however, Newton approached a vision that transformed the images from fashion photos into portraits, and from portraits into reportage, almost like crime scenes. Sleepless Nights contains 71 photos (33 in colour and 38 in black and white) taken for various magazines (Vogue included) and it is the book that defined his style and irony, making it an icon of fashion photography. The subjects, usually partly nude models wearing orthopaedic corsets, women harnessed with leather saddles, as well as mannequins mainly lovingly tied to women, were systematically shot outside the studio, often in provocative poses, suggesting the use of fashion photography as a pretext for creating something entirely different and very personal.

Newton attained his leading position in the history of the picture in the second half of the twentieth century with Big Nudes of 1981. Its 49 black and white photos opened up a new dimension in the history of human photography: that of blow-ups, which, from this moment on, went into galleries and museums all over the world. In his autobiography (2004), Newton explained how the full-length nudes photographed in the studio with a medium format camera, which he used to make the full-scale prints of Big Nudes, had been inspired by the posters circulated by the German police in their search for members of the RAF (Rote Armee Fraktion) terrorist group.

Helmut Newton was born in Berlin in 1920 into a rich family of Jewish origin. He left Germany after the imposition of the Nazi racial laws and found refuge in Singapore and then Sydney, where he enlisted in the Australian army and married the actress and photographer June Brunnell (aka June Browne or Alice Springs). After the war he worked in Melbourne for Playboy and in Paris, where he reached the peak of his success between 1970 and 1980 with the Sleepless Nights and Big Nudes series; working with Chanel, Versace, Blumarine, Yves Saint Laurent, Borbonese, and Dolce&Gabbana. In 1984 he made a video with Peter Max on missing persons, Surrender Your Heart. He died on 23 June 2004 in a car accident.

Dowload all the images from HERE

This email address is being protected from spambots. You need JavaScript enabled to view it.; www.clponline.it

Press release and images at www.clponline.it

10 € concession students under 26, over 65s, holders of special agreements

8 € reduced price for special groups of more than 15 persons

Free children under 6, one escort per group, disabled people and their carers, two accompanying teachers per class, journalists with card, tour guides

Reservation required for groups of more than 15 persons:

Reservation individuals and groups: €1,50 per ticket